For a focus on Kennedy's career in academia, click here.

For a focus on Kennedy's career in politics, click here.

For a focus on Kennedy's career in business, click here.

Now is the time to contact the Regents and let them know what you think of Mark Kennedy as CU's President. Consider signing diversifyCUnow's letter here:

You can also email the Regents directly at:

If you would like to sign up to give public comment the day of the June 17 Regent board meeting, send an email to CUBoardofRegents@cu.edu with the subject line "Live public comment." Include your full name, your organization (or a description of who you are), and the topic "President Kennedy's annual review" in your email. Be sure to send in your request no later than June 14, 2021.

Know of something that should appear on this page? Contact us at diversifyCUnow@gmail.com.

"He certainly should not be allowed to lead a critical social institution and a vital economic driver like the University of Colorado system. Our $4.5 billion annual budget, 67,000 students, and 35,000 employees cannot survive his history of bungled business dealings, unapologetic partisanship, and adversarial leadership"

The Legislative Council of CUSG voted unanimously, citing his “racist or problematic” remarks, and inaction on issues that face BIPOC students and international students, stating “President Mark Kennedy has failed to lead with respect to diversity, equity, and inclusion.”

The governing body for graduate students at CU-Boulder passed a resolution hoping “to hold President Mark Kennedy accountable for his inaction and damaging rhetoric through a formal censure,” saying “it is apparent that [Kennedy] has failed at his responsibility to uphold the pillars of the CU System, including justice equity, diversity, and inclusion.”

University of Colorado Faculty Council issues a Resolution on Reprimand of President Mark Kennedy to "strongly condemn and officially reprimand President Mark Kennedy for his failure of leadership in regard to shared governance as outlined in CU Regent Law and Policy." Faculty Council also calls on President Kennedy "to swiftly and publicly refute recent unwarranted and misinformed attacks on CU faculty in an effort to "promote free expression on the University of Colorado campuses…while simultaneously protecting the university environment" (Article 1E4)."

The CU Boulder faculty assembly considers a motion, based on a letter by Boulder faculty members, to censure Kennedy for failed leadership in diversity, equity, and inclusion.

Kennedy did not release a statement of solidarity with the Asian, Asian American, and Pacific Islander (AAPI) peoples after the shooting in Atlanta. After the fact, he “paralleled” his support for the AAPI community in a statement sent following the mass shootings in Boulder.

At the beginning of the pandemic, President Kennedy sent an email to the CU community. In an inappropriate and insensitive comparison, he compared the recent shift to remote learning to President Norlin’s defense of Jewish and Catholic professors in the face of threats from members of the Ku Klux Klan. This comparison demonstrates a deep misunderstanding of both disaster response and systemic racism.

Kennedy decides to describe the genocide experienced by Indigenous People as "ill treatment" in his land acknowledgment.

The Trump White House proposed a rule which would have changed the duration of stay regulations for international students. Many universities and student governments provided public comment, including the Anschutz Medical Campus Student Senate, the CU Boulder campus, and UCCS’s Chancellor, Dr. Reddy. This rule faced no opposition from the CU system, but eventually died with the incoming Biden administration.

During his President's Report (starting at 47:40), Kennedy said that the "drumbeat of activity" on campus will pick up in the spring, appropriating the Indigenous symbol of renewal and balance. He again apologized for his "poor choice of words" in his Trail of Tears comparison just one minute later, but still provided no evidence that he understands why his comment was harmful. Three quarters of Kennedy's report was spent talking about the technology and innovation program corporate partnership expansion and his COVID messaging to students. This outreach appears to be limited to producing awareness videos for distribution on social media.

CU signs a five year contract with PointsBet, a online bookmaking company that profits off the labor of students without compensating them.

Apology for "Trail of Tears" comparison

In a 112-word statement, Kennedy apologized for his statements at the Faculty Council meeting. He said "I apologize for my poor choice of words" and said he "can and will do better."

During a Faculty Council meeting, Kennedy compared the lack of online education options to the Trail of Tears, an act of genocide by the United States government to remove Indigenous people from the American South.

The President's Office sent a memo titled "Shared Communication Protocol," to nine administrators asking them to submit any statements on a list of sensitive topics to Kennedy's office for review before publication. The memo asked administrators to "write in purple ink, not blue or red" when talking about the following "sensitive topics": 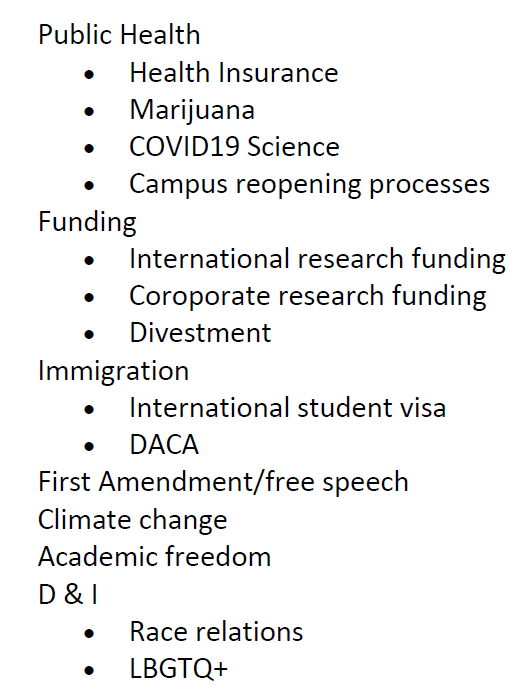 Regent Gallegos later walked back the move, saying the memo "should not be viewed as policy, but as a suggestion."

On July 6th, the Trump White House issued a xenophobic directive for international students to attend in person classes when the majority of higher education was returning to online classes. Later that week, 180 universities joined together and filed a brief supporting Harvard students’ request for a restraining order to stop the directive. CU did not release a statement about this brief until the morning of July 14th, even though the Colorado State University System, Colorado College, the University of Denver, Regis University, and MSU Denver, were all original signatories. Although CU released a statement on July 7th, empty statements about working with partner institutions left international students feeling abandoned by their university. The July 14th statement, released one day before the Trump Administration rescinded the directive, rang hollow, since even then the University was still “reviewing opportunities to join amicus briefs.”

Kennedy presented a four point strategic plan to the Boulder Faculty Council. One point of that plan is "Diversity, Equity, and Inclusion." This plan presents no new strategy when compared to CU Boulder's IDEA Plan, released in the fall of 2019.

Though Kennedy privately supported the proposition, he did not use his platform to support the push to retain revenue for education and transportation, while Colorado public universities posted updates and publicly supported the measure.

Board of Regents confirms Kennedy as president

In a (5-4) party-line vote, the Board of Regents confirms Kennedy as system president.

An Open Letter to the CU Regents From CU Faculty Council LGBTQ+ Committee was submitted, asking the Regents to reconsider their support for Kennedy as system president. They cited his anti-same sex marriage record in Congress and his statements during the UCF and CU search processes regarding DACA students and affirmative action.

Based upon the four campus open forums, the Faculty Council issued a scathing “Report on Mark Kennedy and Ethical Misconduct” detailing eight examples of misconduct, most of which were related to DEI matters.

Though Kennedy said you have to do more than just sign a letter, in reference to DACA students, he has never signed the Pomona letter. (UCCS, CU-Denver, and Boulder)

Kennedy highlighted certain aspects of his congressional record, while dismissing concerns about others. Kennedy said, "I had a bill that wanted to have hospitals be required to report undocumented workers before providing care. I voted against that bill," but dismissed concerns about his votes for a border wall and increased military presence at the border. (Anschutz and CU-Denver)

Faculty members question Kennedy on the statement in his CV that he "met with all tribal colleges to establish 2+2 Finish in 4 programs for priority degrees." At the CU Boulder open forum, Kennedy admits that the meetings likely occurred as part of his welcome tour to campus and that only one such program exists now.

Kennedy claimed multiple times at the open forums, and on his CV, that graduation rates increased at UND across the board, and that diverse communities had the same increase in graduation rates when he came there as president. However, UND statistics show graduation rates decreased for Asian and Indigenous students and that much of this graduation rate increase was created by lowering the number of credit hours required to graduate. (Anschutz and Boulder)

While answering questions about diversity and inclusion, Kennedy uses "exclusive" several times instead of "inclusive" and otherwise stumbles over language regarding race, sexual orientation, and gender. Sometimes, he catches himself and apologizes, or the crowd boos him into realizing the mistake, but other times he appears to be confused at the negative reaction from the crowd. (Boulder, CU-Denver, UCCS)

University of Colorado Boulder Student Government (CUSG) groups pass resolutions rejecting Kennedy as President finalist, but are told to "take a step back" by Regents.

Polis tweets, "As the University of Colorado moves forward in its selection process for a new President, it's very important that they find a candidate that unites the board. It's never good for a candidate or the institution if the board is split on a decision of this magnitude.

In an interview with CPR, Kennedy was asked for his thoughts in general on affirmative action in college admissions, he answered "I have not wrestled with that at the university yet in that our restrictions have not been as, let me go back. Can I just not answer that question?" Kennedy later made a statement saying his answer was a result of thinking he'd be late for another meeting, but he has never expressed support for affirmative action in college admissions.

UND Chancellor Mark Hagerott sent a letter to Kennedy, accepting an email he sent to the community saying he was "sorry to leave UND" as his de facto resignation. Kennedy's CU nomination was at least the second time Kennedy applied for another position during his first three years at UND.